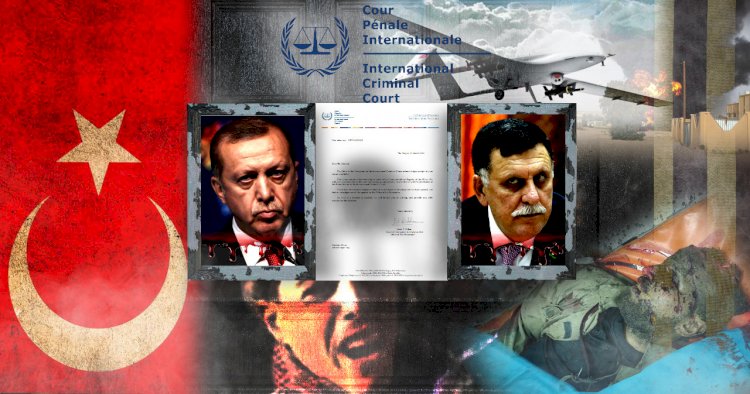 Today, Wednesday, the International Criminal Court in Dee Haag city, Netherlands accepted a case submitted by The Libyan Organization for Terrorism and Extremism Victims and Afro-Asian Center For Studies And Consultations to the Office of the ICC Prosecutor. The case entitled “Turkish aggression against Libya.”

Furthermore, the case included Recep Tayyip Erdogan, President of the Turkish Republic, Fayez Mustafa Al-Sarraj, former President of the Presidency Council of the Libyan Government of National Accord, and several allied militia leaders.

Particularly, these crimes are condemned by the international community and are punished by law.

Erdogan and Al-Serraj crimes are considered crimes against humanity, as they collectively committed extreme violations of the International treaties.

Accordingly, The Libyan Organization for Terrorism and Extremism Victims and Afro-Asian Center For Studies and Consultations provided a portfolio of documents consisted of twenty crimes committed by Erdogan and Al-Sarraj in Libya. It was accompanied by unequivocal evidence and evidence of their crimes against humanity and the Libyan people.

All in all, the crimes were against peace and humanity, such as spreading hatred. They used methods to assist and encourage youth to achieve the agenda.

Consequently, one of the worst crimes committed by Erdogan, the crime of transporting, training, financing, and recruiting mercenaries.

One of the participants in the case submitted and accepted by the International Criminal Court said that the twenty crimes committed by Erdogan and his regime and Fayez al-Sarraj and his entourage are war crimes against the Libyan people for which these criminals must be held accountable, as each crime was presented according to the provisions of the legal articles that regulate the work of the court. The International Criminal Court has accepted it and will be investigated soon to account for the criminals internationally.

Dbaiba To GNA Leaders: Your Mistakes Are Unintended And We Will Learn From Your Experience